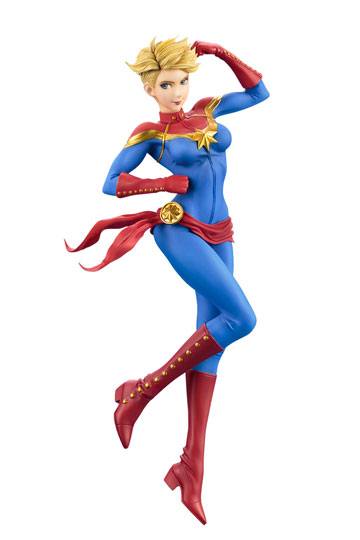 Kamala Khan’s idol, “Captain Marvel” joins the lineup! Based on an illustration by Shunya Yamashita, this statue depicts the former Miss Marvel Carol Danvers after she makes her debut as Captain Marvel. With a live action movie scheduled for 2019, Captain Marvel is a hero to look out for! Having served as the leader of the Avengers, Danvers is deeply respected by many other heroes. Her courageous smile presents the dignity and confidence required of a strong leader, and the detail in her freshly cut hair and defined muscles make this statue a must for your collection! Display your Captain Marvel Bishoujo statue with the previously released “Marvel Bishoujo Miss Marvel (Kamala Khan)” to depict the two fighting side by side! Stands 23 cm tall in 1/7 scale.