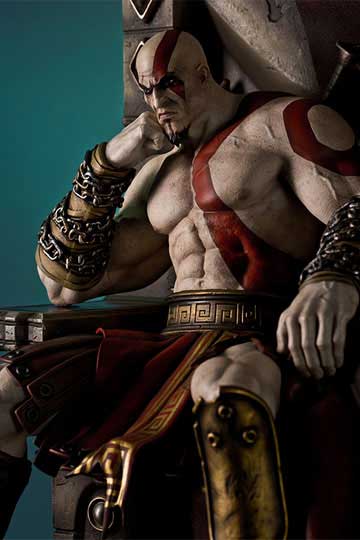 Gaming Heads is proud to showcase Kratos on Ares’ Throne, depicting the ultimate scene at the end of the original God of War. The entire scene has been cast in high quality polystone resin, and has been hand painted to allow for the most intricate of detailing. Kratos is depicted at ¼ scale, meaning that the entire piece is a breathtaking 29 inches tall to the top of the throne’s spires.

After confronting and slaying Ares, Kratos realised that the nightmares that had been haunting him for the past decade would never leave, and sought an escape from the memories plaguing his mind. After throwing himself from the highest mountain in Greece into the Aegean Sea, Kratos was miraculously spared from death by the gods. In thanks for putting an end to Ares’ reign of destruction, Kratos ascended to take Ares’ place on his throne as the new God of War

Each statue comes in deluxe full color packaging, an individually hand numbered base and a certificate of authenticity.