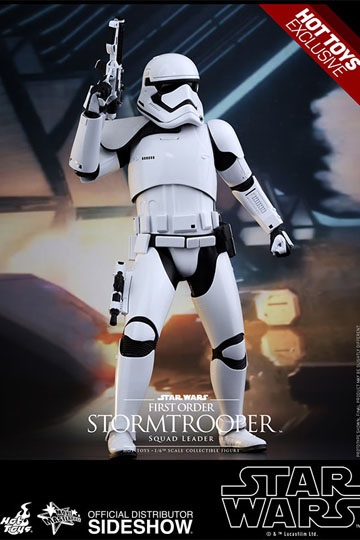 The long awaited sequel of the epic Star Wars saga – Star Wars: The Force Awakens hits theaters this December! To celebrate the upcoming release of this exciting new film, Sideshow Collectibles and Hot Toys are thrilled to present the new First Order Stormtrooper Squad Leader sixth scale collectible figure from Star Wars: The Force Awakens as an exclusive item that is only available in selected markets!

The highly-accurate collectible figure is specially crafted based on the image of the First Order Stormtrooper Squad Leader in Star Wars: The Force Awakens. This collectible figure features the brand new design First Order Stormtrooper armor and helmet, the white pauldron that indicated the rank of squad leader, a highly detailed blaster, and a specially designed hexagonal figure stand with the First Order’s emblem!